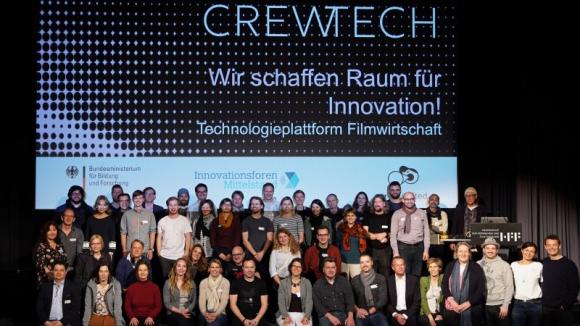 "Everything that has happened so far in the field of ecological sustainability in the German film industry is based on the commitment of individual institutions and individuals," states Oliver Zenglein, who, as managing director of the Crew United digital industry platform, initiated the Crew Tech initiative. For decades, film has been produced under the same conditions, whereby the perpetual high cost and time pressure as well as the small-scale nature of the industry have blocked innovation.

Thanks to the support of the Federal Ministry of Education and Research, partners from research, development and production as well as service providers and users have been working together since September 2018 to develop and implement sustainable technologies and processes for the media industry.

Katja Schwarz has been involved in the Crew Tech Innovation Forum from the very beginning and is enthusiastic about the co-creation process that led to the Innovation Conference on 21 & 22 March 2019 at the Munich University of Television and Film: "For more than ten years, there have been great ideas, recommendations for action and experiences on how great programmes can be produced in an economically, ecologically and socially sustainable way. Nevertheless, the necessary change is happening too slowly. That's why I support Crew Tech.

We are working both on training courses and technical developments and on legislators creating the framework for sustainable media production: they must establish fairness and climate protection as standards and at the same time promote their implementation and create incentives for innovation."

The conference impressed by its format with open space and design thinking elements. It ended as a starting point with four elaborated solutions for more sustainability in the film industry and new members in the network > more in cinearte

We of Great Idea! are pleased to be mentioned in the magazine ver.di | MENSCHEN MACHEN MEDIEN and in cinearte 451 as a teaser.