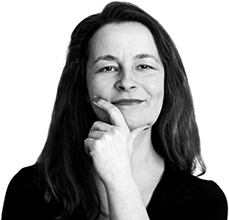 Katja Schwarz, born 1966 in Munich als Katja Grobholz, after a year abroad in Great Britain and Italy studied Slavonic and English studies and philosophy. She spent six months in Russia and was able to gain first film experiences while making her own documentary film. She also worked as gallery manager at Kunstpavillon in Munich.

After graduating from Ludwig-Maximilians-University in Munich she worked as production assistant at megaherz tv GmbH until she joined Odeon Film AG in 1996. There she headed the press and PR department of the whole Odeon Film Group and served as online and IR manager. 2010 she took on the additional remit as sustainability advisor, to insure corporate social and environmental responsibility in film and TV production. This activity then was a novelty in film production and gained importance over the years, likely to become a standard.

Since 2013 she has extended the Tolle Idee! network's offer and expertise in the new field of "Green Filmmaking", i.e. consulting, teaching and writing for production companies, broadcasters, institutions,festivals and filmmakers to promote the concept of sustainability in media production.

Among other events, she took part in the following activities:

Katja Schwarz was part-time working as PR Manager and Sustainability Consultant for the architectural and consultancy company CSMM - architecture matters.

She has also been working as translator from Russian, English and as web designer.