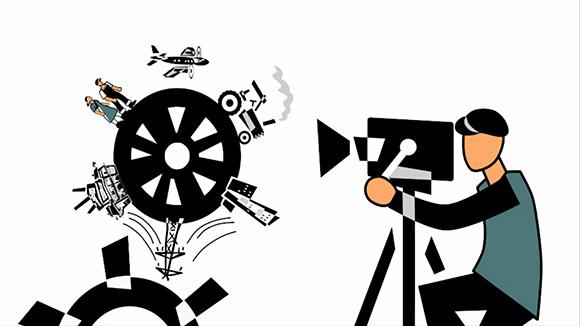 The foundation of the Workers‘ International Relief (WIR; German: Internationale Arbeiterhilfe IAH; Mezhrabpom in Russian) in 1921 which was managed from Berlin by the young communist official Willi Münzenberg, marked the beginning of a unique phase of German-Russian film relations. Initiated to provide famine relief in the Volga region, the political work of WIR led to the production of Russian and German films as well as to large-scale film import and export to and from Russia. In 1924 WIR joined forces with the Moscow-based studio Rus and founded the production company Mezhrabpom-Rus (later Mezhrabpom-Film). One year later they added the German distribution and production company Prometheus. Until the forceful liquidation of WIR in Berlin, in 1933 by the Nazis, and 1936 by order of Stalin, close to 600 feature films, documentaries and animation films have been produced by this binational company. Among the most important of their directors were Boris Barnet, Vsevolod Pudovkin, Iakov Protazanov, Lev Kuleshov and Phil Jutzi. But also less wellknown talents like Aleksandr Andrievsky, Margarita Barskaya, Sergey Komarov and Vladimir Shneiderov are to be rediscovered, along with the most interesting documentaries and animation films of the Red Film Factory.

As a result of his archival research over more than four years in Moscow and Berlin, and after the conference he organised at the German Historical Institute in Moscow 2011, Alexander Schwarz had been invited to curate (together with Günter Agde) the Deutsche Kinemathek retrospective at the 62nd International Film Festival in Berlin (Feb. 2012), with over 40 feature, documentary and animations films.

ZDF/ARTE and MDR commissioned a cultural documentary on the topic to Ilona Grundmann Filmproduction, called „Die Rote Traumfabrik" (The Red Dream Factory, 55 min.). Alexander Schwarz wrote and directed it and presented it in a special screening at the Berlinale. It premiered Feb. 15, 2012 on ARTE and was repeated later in the year at MDR. Rare archive footage and photos, many of them shown for the first time, make it possible to relive the adventurous history of this unique film studio at WIR and the vision of its founders Willi Münzenberg and Moisei Aleinokov. The documentary presents interviews with renowned film historians, contemporary filmmakers and producers and hence connects film history of the 20s and 30s to Russian films nowadays.

The catalogue book edited by Günter Agde and Alexander Schwarz, by the title „Die rote Traumfabrik, Meschrabpom-Film und Prometheus 1921–1936" was awarded the Willy Haas prize for the best publication on the German film heritage in 2012. The book had been published for the retrospective at Bertz+Fischer, Berlin, and for the first time in Germany collected essays of German and Russian film scholars on the history and esthetics of the studio’s films, presented historical documents, a complete filmography and a large selection of photographs and avantgarde film posters.

The retrospective was also presented in part and with additional film by Alexander Schwarz at the Munich Filmmuseum (Feb./March 2012), MoMa New York (April 2012, curated with Lawrence Kardish) and in October/November 2012 at the Leipzig Festival of Documentary and Animation Film (curated with Guenter Agde).